The Beautiful Tongue of the Devil (A. konjac) 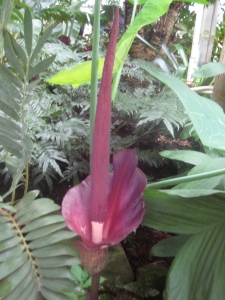 Amorphohallus konjac at the Conservatory of Flowers in San Francisco

Sometimes called the Devil’s Tongue and also referred to as the Voodoo Lily (but an entirely different species from the Voodoo Lily featured here) this beautiful specimen was caught blooming and befouling the entire Lowland Tropics gallery at the Conservatory of Flowers this weekend! And I count myself among the lucky few who got to “enjoy” this disgusting delight of the rottenest botanist variety.

According to the Conservatory of Flowers: “Our bloomer is an amorphophallus konjac. Despite its unsavory odor, it’s actually used to make candy! It’s gelatinous excretions can be an ingredient, however we featured it in Wicked Plants, as the gelatin can often be so thick that children have choked.”

Apparently this Jello-like substance is used as a vegan substitute for gelatin and is made into the popular Asian fruit jelly snack, Lychee cups. (Adults have been known to choke on these too.) In fact, a quick google search will lead you to a number of products that feature konjac. Fiber-rich vitamin supplements are made from the tuber, and thought to promote healthy digestion and weight loss. The tuber is used in soups and stews, and you can even buy konjac flour. However parts of the plant are known to be poisonous. O’ the wonders never cease!

This particular Amorphohallus blooms about once a year, though it can skip a year or two, and must be kept in the tropical hothouse temperatures of the conservatory’s greenhouse or steamy main gallery.

How best to describe the smell? Acrid, cloying–like the body of a roadkill animal left in the noonday sun. A touch sulfuric. This is the kind of smell you can’t quite place but you know you have smelled it before. It is the smell of decay. It reminded me most of the smell when you have left flowers in a vase too long and you finally decide to toss them, thus disturbing the putrid water that has been writhing with bacteria for a week or more. You dump it out and are aghast at the end result of what was a gorgeous, cheerful bouquet.

I would guess this plant is about two feet tall, from stem to the very top of its spadix, which sticks out considerably from its beautiful spathe. It is an incredible burgundy color, very velvety. If you dare get up close enough to examine it! It is tricky to see from the pictures but there is a sign to the left which will give you a bit of perspective. I tried to make my son stand next to it but he wasn’t having it!!

Hardiness: To about 10 degrees.

Plant in shade in sunnier climates, prefers more sun in foggier or cooler climates. Keep outdoors when blooming if you don’t want you house to smell like a toilet.

The Devil's Tongue at the C of F

5 thoughts on “The Beautiful Tongue of the Devil (A. konjac)”